Learn from our foot and ankle specialists: ​

A hammer toe is a contracture, or bending, of the toe at the first joint of the digit, called the proximal interphalangeal joint. This bending causes the toe to appear like an upside-down V when looked at from the side. Any toe can be involved, but the condition usually affects the second through fifth toes, known as the lesser digits. Hammer toes are more common in females than males.​

The heel bone, calcaneus is the largest of the 26 bones in the human foot, which also has 33 joints and a network of more than 100 tendons, muscles, and ligaments. Like all bones, it is subject to outside influences that can affect its integrity and its ability to keep us on our feet. Heel pain, sometimes disabling, can occur in the front, back, or bottom of the heel.

Causes
Heel pain has many causes. Heel pain is generally the result of faulty biomechanics (walking gait abnormalities) that place too much stress on the heel bone and the soft tissues that attach to it. The stress may also result from injury, or a bruise incurred while walking, running, or jumping on hard surfaces; wearing poorly constructed footwear (such as flimsy flip-flops); or being overweight

Tendonitis is the inflammation of a tendon. Tendons are thick cords of tissue that connect muscles to bone.

Causes
Tendinitis can result from an injury or over-use. Improper stretching prior to exertion or incorrect form during physical activity can also contribute to the development of tendinitis. Some people, including those with “flat feet,” tight tendons or arthritis, are particularly prone to tendinitis.

Athlete's foot is a skin disease caused by a fungus, usually occurring on the bottom and in between the toes.  Shoes create a warm, dark, and humid environment which encourages fungus growth.  The warmth and dampness of areas around swimming pools, showers, and locker rooms are also breeding grounds for fungi. Because the infection was common among athletes who used these facilities frequently, the term "athletes foot" became popular.  Not all fungus conditions are athletes foot. Other conditions, such as disturbances of the sweat mechanism, reaction to dyes or adhesives in shoes, eczema, and psoriasis, may mimic athletes foot.

We are dedicated to our clients and offer a wide variety of services in order to make sure you are taken care of.

Smelly feet can be embarrassing and uncomfortable. Fortunately, treatment options are available.

Causes
Feet can smell as they sweat and it traps inside footwear. Sweat interacts with bacteria to cause the smell. Feet have more sweat glands than any other part of the body.  Footwear prevents the sweat from evaporating. Fungus and bacteria produces acid and causes odor.

A number of conditions can increase the chance for smelly feet, such as a stress, certain drugs, and hormonal changes.

Plantar fibromatosis is a fibrotic tissue disorder which we see commonly affecting the plantar fascia.  It is non-cancerous and is characterized by the presence of excess collagen or fibrotic tissue. The most common symptoms of are firm nodular masses that can be felt just under the skin in the arch on the bottom of the foot. Unlike the related condition Peyronie's disease, plantar fibromatosis nodules are not known to resolve on their own. Studies indicate that this condition is diagnosed most often in the middle-aged and elderly population, although it can affect people of all ages. It has been found that the incidence may be as high as 25% in the middle-aged and elderly population and that the condition affects men approximately 10 times more often than women.  The mass is often non painful but sometimes can cause pain with weight bearing.

Gout classically presents as severe pain and swelling to the big toe joint.  But gout can affect any joint in your body and sometimes even in your soft tissue.  Foods with high purines especially beer, alcohol, and shell fish can increase your uric acid which can illicit a gout attack.  Medication to lower uric acid is often needed to control and prevent gout attacks.  During a gout attack a cortisone injection, medication, and immobilization can eliminate the pain.  Gout is often hereditary and affects males more than females.

Onychomycosis or fungal toenails is an active fungal infection that lives deep under the nail, causing thick, flaky, brittle and discoloration in toenails.   It can lead to changes in nail shape which causes incurvation of the toenail and ingrown toenails in some patients.  It may spread to other nails and will not go away on its own.  It may worsen if left untreated.  ​​

Calluses are very common and build up as a result of pressure and friction on our feet from the ground.  There are other causes of calluses with a plantar wart being the next most common.  A plantar wart is caused by a virus that lives in between the dermis and epidermis.  A plantar wart is usually deeper and more painful than a friction callus and can get bigger or spread if left untreated.  Treatments for calluses include paring, offloading and freezing depending on the cause.  Revitaderm cream which has 40% urea is recommended to prevent buildup pf calluses.

​Surgical procedures may be offered to prevent recurrence. 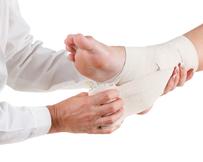 Diabetic Peripheral Neuropathy is a condition in which the nerves of the feet, legs and/or hands do not function properly due to sustained high blood glucose levels. Common symptoms include tingling, numbness, sharp pains or burning pains to the affected parts of the body.  Diabetics are often thiamine (vitamin B1) deficient. Thiamine deficiency is a well known cause of peripheral neuropathy as well.  Diabetics with neuropathy have a high risk for diabetic ulcers.  A diabetic ulcer is a open wound that does not close because their protective sensation "fire alarm" is not working and they do not have normal pain to warn them when they have an open sore.

A bunion is an angulation deformity of the big toe which occurs when the big toe deviates towards the 2nd toe causing the big toe joint (the 1st metatarsal phalangeal joint) to be malaligned.  This causes widening of the foot and a bony prominence which is a source of pain especially in tight fitting shoes.  Because this joint carries a lot of the body’s weight while walking, bunions can cause extreme pain if left untreated. The joint itself may become stiff and sore as well making even walking barefoot difficult and painful.  A bunion—from the Latin “bunio,” meaning enlargement—can also occur on the outside of the foot along the little toe, where it is called a “bunionette” or “tailor’s bunion.

Arthritis is inflammation of one or more joints. A joint is the area where two bones meet such as ankles and throughout the foot. There are over 100 different types of arthritis.

Causes, incidence, and risk factors
Arthritis involves the breakdown of cartilage. Cartilage normally protects a joint, allowing it to move smoothly. Cartilage also absorbs shock when pressure is placed on the joint, such as when you walk. Without the normal amount of cartilage, the bones rub together, causing pain, swelling (inflammation), and stiffness.